What is a 5-Axis CNC Machine, and How Do They Work?

Take a moment to imagine how challenging it would have been for machinists in the early 20th century to fabricate parts and structures. The best machine tools available to them at the time were chisel, hammer, and manually operated lathe machine. But everything changed after Richard Kegg developed the first computer numerical control (CNC) machine in 1952.

And ever since, CNC machining technology has continued to advance, evolving from a mere simple three-axis machine controlled with punch cards to a more sophisticated 5-axis CNC machine.

A 5-axis CNC machine is a machining technology that provides infinite possibilities as to the part size and shapes you can fabricate. It offers high accuracy and precision and is heavily relied on by top-tier machine shops to manufacture pretty much any design you come up with.

What is a 5-Axis CNC Machine? 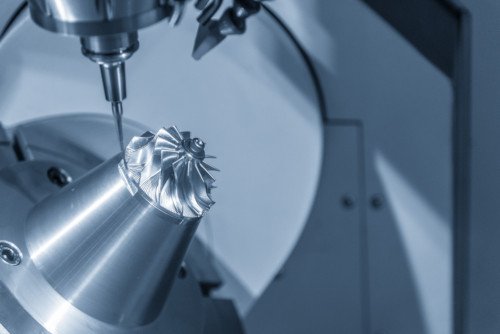 To help understand what a 5-axis machine is, let’s start by explaining what an axis count means in CNC machining.

Machining axis count describes the number of directions in which the CNC cutting tool (or workpiece) can move to produce the desired machined part. For example, conventional CNC machines typically have a three-axis count, meaning their cutting tool can move across the X, Y, and Z axes―sideways on the X-axis, vertical on the Y-axis, and back and forth on the Z-axis (see Figure 1).

A 5-axis CNC machine adds to these three linear axes by being able to also tilt (and rotate) the table holding the workpiece, as shown in Figure 1. These two new rotational axes are typically called the A-axis (or tilting table axis) and the C-axis (or table rotation axis); they allow you to machine more complex geometries than the 3-axis CNC machines. 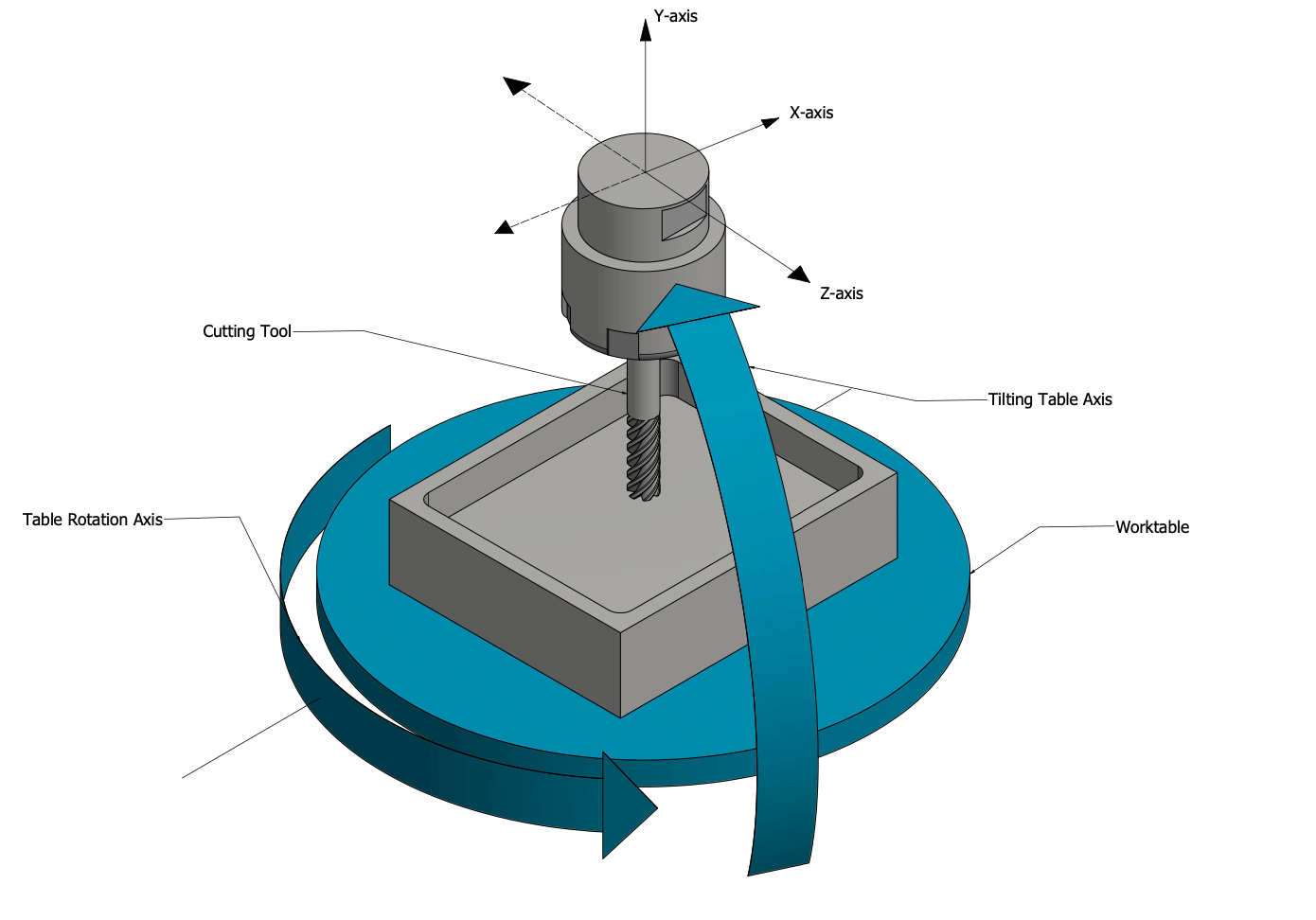 How Does a 5-Axis CNC Machine Work?

Like every other CNC machine, a 5-axis CNC machine relies on computer instructions to control the motion of the cutting tool (and workpiece) to fabricate the desired part.

The 5-axis CNC machining process starts with the designer creating a 3D CAD (computer-aided design) model of the desired part using CAD tools like SolidWorks and Autodesk Inventor. Next, the machinist exports this CAD model into a CAM (computer-aided manufacturing) software, which converts the drawing into a computer program (also called G-code).

5-Axis – Where Did It Come From

It all comes down to Rene Descartes, who was a French philosopher and mathematician. The story is very similar to Newton’s apple one. One day Descartes was lying in bed when he noticed a fly. When looking at it, he had a realization that he could describe its position in the room using three numbers, represented by the variables X, Y, and Z – something that we now call the Cartesian Coordinate system and that’s still in use today despite the fact that over 300 years have gone by since Descartes’ passing.

Now, you might be wondering where did the other two come from. Aside from describing the fly’s position in the space, it is also possible to describe its orientation. So, the fly rolling around X would be the fourth axis, while the fifth axis would be the fly rotating around Y. Some also argue that there’s a sixth axis, rotating around the Z-axis.

The configuration you choose for the 5-axis CNC Milling Machine determines which one of the three rotational axes will be used. There are two main configurations – a trunnion-style machine and a swivel-rotate-style machine.

The main difference between the two is the way in which the rotary axes are expressed – in trunnion-style it happens through the movement of the table, while in the swivel-rotate-style of the 5-axis CNC Milling Machine is done through the swiveling of the spindle. Both of them have their own advantages, so which one will be used depends mostly on what needs to be done.

What are the Advantages of 5-Axis CNC Machines? 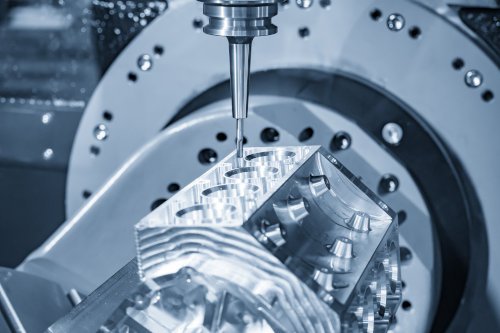 Over half of the parts produced with CNC require five-sided machining, which is why more and more manufacturers decide to include it in their services. Additionally, 5-axis CNC machining offers many benefits when compared to, for example, 3-axis machining, such as:

Because of its five axes, 5-axis CNC machines allow you to set up your workpiece once; the machine then handles every machining operation needed to create your desired part. This is quite different from conventional 3-axis machines, where you’d need several machine setups to fabricate a complex geometry.

The fourth and fifth axes of 5-axis CNC machines allow you to bring the workpiece closer to the cutting tool. This means that you’re able to use shorter cutting tools, which are less susceptible to vibration and allow you to achieve better surface finishes.

Due to movement flexibility, 5-axis CNC machines are much more precise than 3-axis machines, which is why they not only produce smoother parts but they can also produce parts that would be too complex for a 3-axis machine.

5-axis CNC machining can be used in the production of many parts for which 3-axis machining is simply not suitable.

While there are more benefits associated with using 5-axis CNC machining, these are the most important ones.

5-axis CNC machining can be used to produce parts utilized in plenty of different industries due to their efficiency and the ability to produce complex shapes. Here are a few examples of industries that most commonly take advantage of this technology: 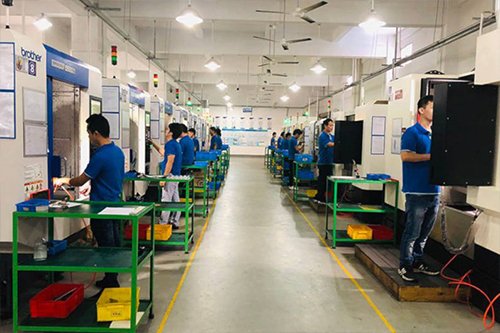 Without a doubt, 5-axis CNC machines simplify the fabrication of complex parts. However, not all designs are worth creating using 5-axis machines. For example, you might be better off fabricating high-precision holes, cutouts, and cavities using 3- or 4-axis CNC machines. That’s why we always recommend that you speak to a CNC machining expert before you take the plunge with manufacturing.

Gensun Precision Machining is a top-tier CNC machining service provider across Asia and the globe. Not only do we have CNC machining experts and engineers, but we also have a wide range of advanced CNC machining technologies, including 3-, 4-, and 5-axis CNC machines.

Tell us about your project, so we can help you determine which machining technology best fits your needs. 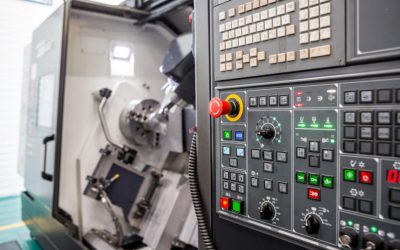 What is CNC Machining? Understand This Fascinating Manufacturing Process

Take a look around, identifying and naming all the products in your surroundings, including phones, tablets, laptops, wrist watches, vehicles, and desks. Most, if not all of these items, are end products of CNC machining. CNC machining is a manufacturing process that... 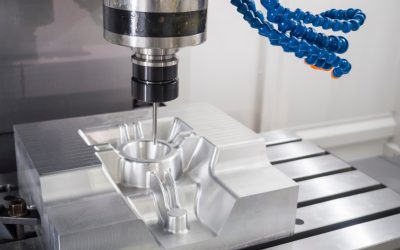 Answers to 4 FAQs About CNC Precision Machining You Should Know

When it comes to turning your product idea into a product, precision is the key to your success. And one way you can achieve precision is to fabricate your parts using state-of-the-art manufacturing processes like CNC precision machining. However, most people who... 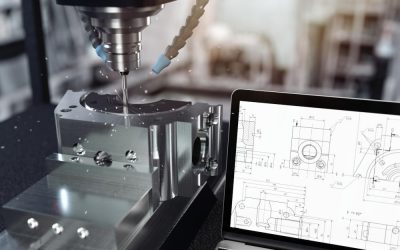 Custom Machining: Here is How to Prepare for Your Project Quote

Have you recently come up with a custom part design, or do you need to manufacture a part with special requirements? If so, the next steps are to hire a manufacturer, send over your 3D computer-aided design (CAD) file, receive a fair product quote, and manufacture...